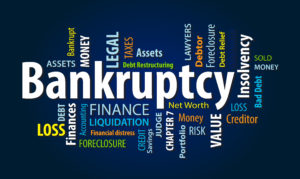 Section 6402(a) of the Internal Revenue Code provides the Secretary of the Treasury with the discretion to set-off “any” tax overpayment against a taxpayer’s preexisting tax liabilities.  Section 553 of the Bankruptcy Code, in turn, allows the IRS to set off a tax refund against a dischargeable pre-petition tax debt, stating that: “[e]xcept as otherwise provided in this section and in sections 362 and 363 of [title 11] does not affect any right of a creditor to offset a mutual debt owing by such creditor to the debtor that arose before the commencement of the case under this title against a claim of such creditor against the debtor that arose before the commencement of the case * * * *.  However, Section 522(c) of the Bankruptcy Code states that exempt property is not liable for discharged debts.

On the surface, a potential conflict appears to exist between Section 522(c), which protects property claimed as exempt in bankruptcy from being used to satisfy “any” prepetition debts, and Section 6402(a), which allows the IRS to offset “any overpayment” against a taxpayer’s preexisting tax liabilities.  The courts are in conflict as to which section governs.  In In re Alexander, 245 B.R. 280 (W.D.Ky. 1999), the court held that the IRS was not entitled to exercise a right of setoff against a tax refund which became payable to a Chapter 7 debtor post-petition, in order to reduce a dischargeable pre-petition tax debt not secured by a lien, when the debtor had claimed the tax refund as exempt.  The court stated that Section 522(c), which provides that exempt property shall not be liable for a debtor’s pre-petition debts, had to be given precedence over what was perceived as a conflicting setoff provision.

As a result, a debtor would completely lose the ability to exempt property from the reach of creditors possessing a right of setoff under §553(a).  In contrast, by construing the provisions to allow setoff to the extent that the debtor has not exempted property, the court gives effect to both §522(c) and §553(a).  Second, the chief policy behind the Bankruptcy Code – providing the debtor with a fresh start – is furthered under [this theory]   This fresh start allows the debtor “a new opportunity in life and a clear field for future effort, unhampered by the pressure and discouragement of pre-existing debt.” Local Loan Co. v. Hunt, 292 U.S. 234 (1934).  Third, the legislative history of §522 supports the court’s conclusion. Senate Bill 2266 contained a version of §522(c) that would have allowed the IRS to validly perform the setoff in question.  However, that version of §522(c) was rejected by Congress, thereby “indicating that Congress did not intend that exempt property be liable to the payment of dischargeable tax debts.

In re Benson, 566 B.R. 800 (Bankr. W.D.Va. 2017), reached a similar conclusion.  The court noted that Section 553(a) provides “[e]xcept as otherwise provided in this section and in sections 362 and 363 of this title, this title does not affect any right of a creditor to offset a mutual debt owing by such creditor to the debtor that arose before the commencement of the case under this title against a claim of such creditor against the debtor that arose before the commencement of the case” (emphasis added), unless certain exceptions apply not found here.  The court stated that “this title” means all of Title 11 of the U.S. Code, but for the enumerated exceptions, and Section 522(c) is not one of them.  Thus, the preservation of the setoff right should be paramount to the right to claim an exemption giving full accord to the statutory language. Id. at 813.  The court then cited to Taylor v. Freeland & Kronz, 503 U.S. 638 (1992), noting:

Taylor provides generally that a failure to timely object to the validity of an exemption is fatal to the objection.  However, a debtor cannot bootstrap himself into free and clear ownership of a property interest by claiming an exemption in something subject to a valid Section 553 offset, and then claim the exemption invalidated the offset because no one objected.

Although Section 522(c) generally provides that exempt property cannot be used to satisfy prepetition debt, that provision, as a part of Title 11, must be read in conjunction with the unambiguous language of Section 553(a).  As a result, we must interpret Section 522(c) in a way that does not “affect” the “right of a creditor to offset a mutual debt.”  A contrary construction, permitting Section 522(c) to subordinate the government’s offset rights, would violate that statutory directive.

Id. at 124.  The court disagreed that the purposes of the Bankruptcy Code required a different outcome. While it noted that providing debtors with a “fresh start” is one of the purposes of the Bankruptcy Code, it is not the only purpose.  “As our sister circuits have noted, the bankruptcy code also serves the purpose of ‘ensur[ing] fair payment to creditors’”, and the Bankruptcy Code’s preservation of the “defense of offset” serves this additional purpose, by “avoiding the absurdity of making A pay B when B owes A.” Id. at 125.  Further, while bankruptcy courts retain discretion to disallow a creditor’s attempt to impose a setoff under Section 553(a), a court’s discretion to disallow a setoff generally is confined to those circumstances when the validity of the right of setoff can be questioned under other law outside the bankruptcy code. Id. at 125-26.  The court noted that discretion does not permit bankruptcy courts to disregard the plain language of Sections 6402(a) and 553(a).

Finally, some courts have held that a tax refund is not even property of the estate subject to an exemption until after the IRS effects a setoff.  This was the position followed in In re Pigott, 330 B.R. 797 (Bankr. S.D.Ala. 2005).